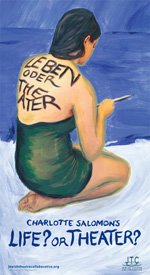 In 1941, a 24 year old German refugee, Charlotte Salomon, painted day and night in a small room in the south of France, creating a 700 page opus of paintings riddled with text and musical references entitled Life? Or Theatre? A Play with Songs. The work weaves the personal narrative of a young girl striving to find her voice as an artist with the larger social narrative of the rise of the Nazis and how that rise transformed the lives of German Jews. Entrusting the work to a local doctor, Charlotte said, "Keep this safe. C'est tout ma vie. It's my entire life." Salomon was sent to the gas chambers in Auschwitz, but the work remarkably, survived, and Solomon, through the work, survives.

Original images and text used with permission from the Charlotte Salomon Foundation & the Jewish Historical Museum of Amsterdam.