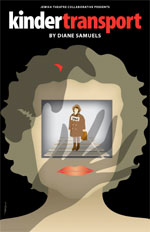 Description: Through the play, Kindertransport and planned satellite programming, JTC brought community together to examine the historical implications of one girl’s story to reflect on the universals that are playing themselves out on contemporary battlefields.

Kindertransport, by Diane Samuels weaves story of 3 generations of women whose lives are intertwined when 9 year old Eva is sent from Germany to Manchester in 1938. Set in attic of middle aged Evelyn, looking for items for daughter’s apartment, boxes are unpacked, and traumatic memories penetrate her present. Her daughter discovers that her obsessive compulsive and occasionally seemingly PTSD British mother Evelyn was German girl Eva.

For JTC, producing this play was anchored in the moral imperative of the Holocaust Never Again; to draw lessons from the Holocaust and broaden the scope of the conversation from the historical to the present.

To further its mission, JTC presented free public satellite programming. On March 1st, Dr. Natan Meir presented a lecture on the Vibrant and Diverse Jewish Life of Pre War Europe and the remnants that remained after the war. March 8th, JTC hosted The Beirut Wedding World Theatre Project, who presented a reading of Honey Brown Eyes by Stefanie Zadravec about the ethnic violence in Bosnia. And finally, Base Roots, a local African American Theatre Company presented a staged reading of Winter Miller’s In Darfur on March 15th.

Throughout the run of the production, Friderike Heuer’s art exhibit Fugue: Exile, Emigration and Displacement was showcased at the theatre.